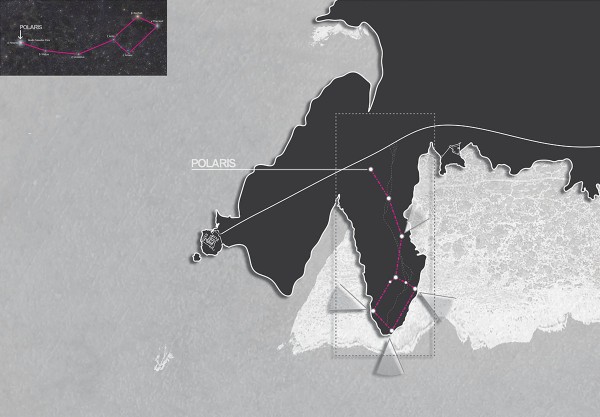 HISTORY
Portugal has a proud and rich maritime history, marked by its far-reaching voyages during the Age of Exploration. The city of Sagres played a big part in this history with its Nautical School of Sagres developed by Prince Henry the â€˜Navigatorâ€™ in the 15th century. Sagres point was important for sailors because it offered a shelter for ships before they set sail attempting the dangerous voyages that lay behind Cape St. Vincent. The sea around Cape St. Vincent is also known for the naval battles which were fought in the vicinity of the Cape.

CONCEPT
The Site Landmark is a place to explore, to engage the sky and the sea. A place to learn more about the history of the area and naval exploration. To emphasize the strong link between naval exploration and star navigation the organization of the site is a projection of the Ursa Minor Stellar Constellation with its main star Polaris, which is on of the most important stars in naval navigation. The location of the architectural interventions represent the exact position of each star from the constellation, with hiking paths linking those areas.

DESIGN
Located next to the main road, from the entrance of the Ursa Minor Hiking Trail, a narrow walkway leads to the first stop. The path slightly touches the ground to reduce its presence to a minimum with the intention to merge the structure with the area while leaving the flora of the site mostly untouched. The walkway goes right through POLARIS, a sliced open cube, with dome shaped interior on which the night sky map is displayed, allowing the visitors to learn more about the star constellations and their importance for naval navigation. At the next architectural intervention called SKY WINDOW, travelers are invited inside through a simple opening. The SKY WINDOW with its partially open ceiling encourages them to stop for a second and look up towards the sky. Further down the trail the visitors arrive on the first Look-Out BELICHE platform, providing shelter and fantastic view to the Beliche Fortress. The SEATING POINT gives the opportunity for hikers to take a break, relax for a moment and learn more about the history of the area. From here on, the walkway splits into two directions, to the west there is the Look-Out ST. VINCENT and to the east the Look-Out SAGRES FORT, enabling visitors to experience the spectacular views respectively to the Cape Saint Vincent and the Sagres Fortress. Where both walkways connect again lays the southernmost point - the Look-Out ATLANTIC which marks the end of the trail - rewarding the visitors with a magnificent view to the Atlantic Ocean. Here they have the opportunity to learn more about the maritime history and the many naval battles fought there.